Raymond Businessman A. G. Basil built the Raymond Theatre. It was state-of-the-art, built during a time when the area was prosperous. It was extremely luxurious with deep red carpets, terra-cotta interior and exterior in a Mediterranean style with crystal chandeliers. A Hope-Jones 5 Rank Wurlitzer Organ was installed in the theatre which opened on October 11th, 1928. Children paid 25 cents and adults paid 50 cents to attend the opening night gala. The theatre, designed to accommodate the first talking motion pictures, opened with the “Jazz Singer.” At that time you would hear Laverne Little, Agnes Fosse Steuer or Bud Henderson play before the movie or during intermission. After 20 years of use the organ fell into disrepair and was eventually spirited out of the theatre. It was in 1952 that the theatre was being leased and the organ was removed and sold without the Basil’s permission. Mr. Alden Bice, an organ enthusiast who traveled the country billed as the “Ole Jazz Tuner” bought the organ without knowing the full situation and installed it in his Wallingford Warehouse.

Several years later, during the 1980’s, the Raymond Theatre fell on hard times and closed its doors. People were watching TV and maintenance costs stretched revenue far beyond upkeep. It was a defunct theatre when word came from the executors of Alden Bice’s estate. Following his death in 1987 the executors of his estate contacted community leaders to ask if they were interested in the return of the organ. They would donate it back to the city if a suitable location could be found. The community was thrilled to have the opportunity to get the organ back. So in 1985 several members of the Raymond community went with two trucks, took apart the organ, loaded it and brought it home. A major project was underway to raise the funds to refurbish and reinstate the organ. In the interim the organ was stored in the now defunct theatre which was so damp the organ grew mushrooms. A massive community effort to refurbish the organ was underway. Many organizations, the Chamber of Commerce and individuals raised funds and applied for grants to make it happen. It was from the organ project that interest blossomed to rebuild the theatre. Residents were determined to “listen again to the Wurlitzer play special music in a special place.” In 1988 through state and local grants the theatre was beautifully remodeled. One million dollars in grants and funding were secured to refurbish the theater between the state of Washington, city of Raymond and the Raymond Chamber of Commerce. A performing arts center was created with a community center addition. The city of Raymond has owned and operated the Raymond Theatre since 1992 and, in September of that year, the theatre was reopened for first-run motion pictures. It wasn’t until February 12th, 1994 that the 1928 Hope-Jones Mighty Wurlitzer was again the beauty mark of the theater and rededicated at a ceremony including the Jet City Sweet Adeline’s, the Cornucopia Concert Band and a silent movie.

In 1999, another project was initiated to purchase a new digital projector. The 35mm film supplied by the movie studios would no longer be available by the end of 2013. A new digital projector had to be purchased to replace the 1928 Cineplex Projector. The cost to the theater community was a whopping $60,000. Another massive fund raiser was undertaken. Local businesses and individuals, Alliance for a Better Community and the L.V. Raymond Foundation took on the challenge. The City of Raymond requested a grant from the Forest Foundation and on March 4th, 2013 Raymond Mayor Jungar announced the funds to purchase and install the digital equipment was collected. On June 20th, 2013 the new digital projector was dedicated.

The Raymond Theatre is now on the register of National Historical Buildings. The theatre seats 347 people, shows movies and hosts many non-profit events. The theatre gives students community service hours and a way to do senior projects. It is a venue for Sunday Afternoon Live which brings live concerts and cultural programs to the community. It is used by non-profit groups for fund raising events, incentive programs for youth, and school performances and graduations. The theatre hosts Business Week every year for 11th grade students to learn how a business works. Organizations such as Alliance for a Better Community and Crisis Support Center hold drug-free and suicide prevention presentations. The Ministerial Association holds free family movie nights and The City of Raymond will hold town meetings and the theatre will rent for birthday parties and weddings. 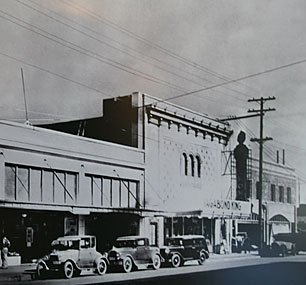